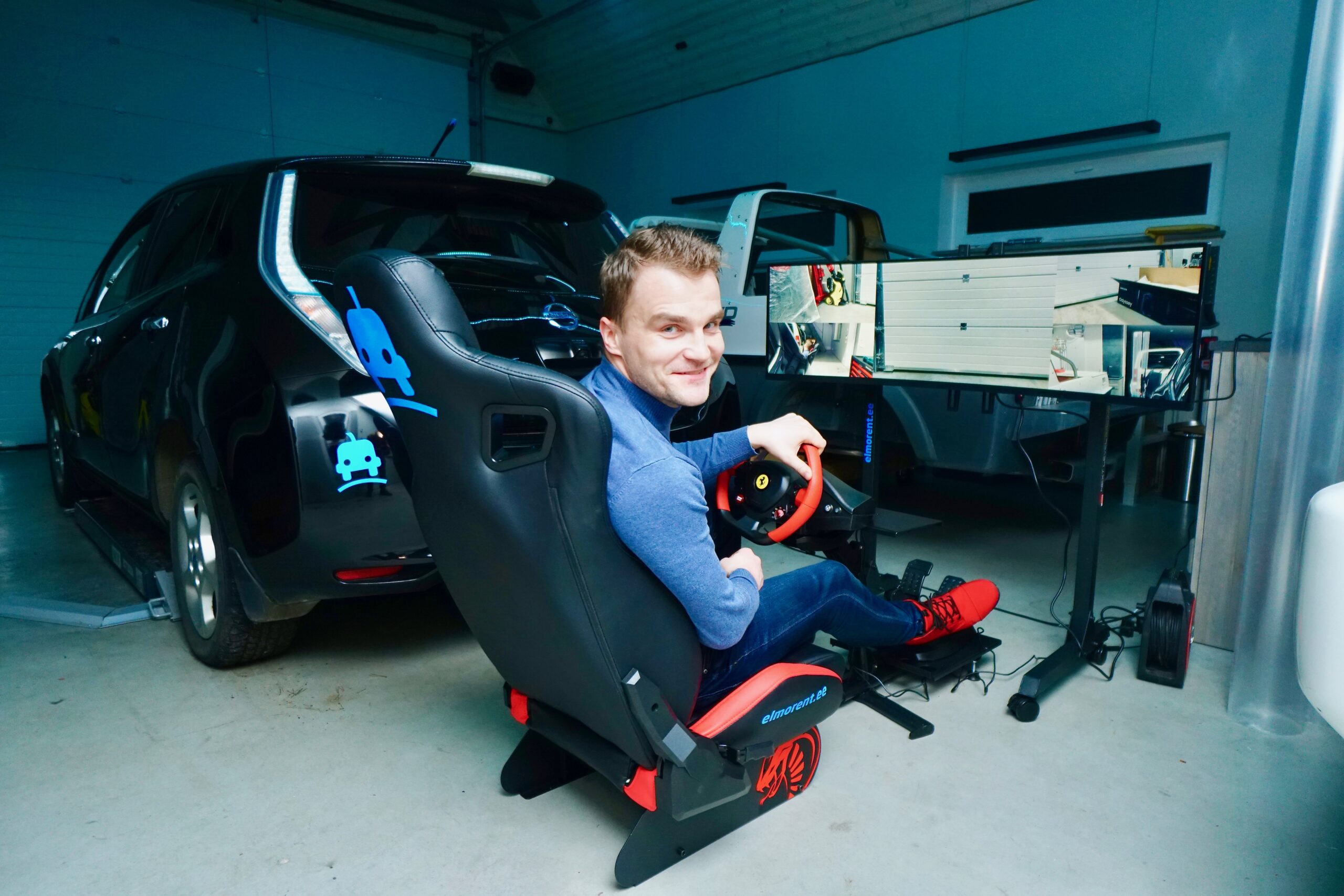 “The crest of the wave is almost upon us and it is going to be a wild ride,” Enn Laansoo Jr., head of new technology and market preparation at ELMO Rent describes the situation. The company is preparing to release an innovative solution that, according to them, should change attitudes towards purchasing a car.

According to Laansoo, car sharing has much more potential than what has been achieved in recent years with taxis and services like Bolt or Uber. What is the reasoning behind this statement? “At the moment, getting a taxi is so convenient that you only need to press a button and the car will be there in five minutes. But for longer journeys, a taxi ride is too expensive. We are working towards getting customers to give up personal cars, which currently are used for 80% of car rides.” If sharing a car becomes as easy as ordering a taxi, the goal will be achieved. Laansoo added enthusiastically that this is undoubtedly a global trend. CityBee also offers car sharing services in Estonia.

The user orders a car much like a taxi

It has been said that self-driving cars will be on Estonian roads in three to five years. However, in the last year, ELMO Rent has been working continuously to develop its remote-controlled car technology. “We are committed to providing an eco-friendly car sharing service with our own remote control technology. The user orders a car the same way they would a taxi. We have an operator who sits in our office in a so-called race car driver’s chair, they have a steering wheel and pedals and the cars will be driven from point A to point B, to the customer. You as the user will get behind the wheel, drive where you need to go and leave the car anywhere you want. And our operator will then remotely drive the car to the next location,” explained Laansoo.

Sounds like science fiction? According to Laansoo, the remote control approach is easier and just one step to take before the arrival of self-driving cars. “Our driver just sits somewhere further away and drives the car remotely between two locations,” he added. By now, the company has completed development on the first phase of their remote control technology. There is no longer a question of whether this is technically or legally feasible. The question for the company is rather how quickly they can meet the demand. Laansoo thinks that it will not make much difference to the customer whether they get a taxi or a car when looking for a ride.

Will we see big yellow warning signs “Caution! A remote-controlled car is driving here!” “Maybe during testing, but we will definitely not install these signs anywhere on the streets if we have proven that our technology is safe to use in our service,” Laansoo explained.

Tested under the watchful eye of the Transport Administration

However, the technology needs to be tested and approved by the Transport Administration. “In real traffic, the main aim of test driving is to find and solve any potential problems,” said Laansoo. During that process, a second operator must be available to take over the control of the vehicle from the first driver, if needed. Addressing gaps in communication may be the main concern.

The company plans to unveil the technology in the coming weeks. In the autumn, they will apply for street testing, during which ELMO Rent’s first customers can order remote-controlled cars.

Why bring remote-controlled cars to the market at all? Laansoo believes it is very important to offer customers an excellent car sharing service that is similar to the experience of having your own car, so that the customer will continue using it. This means that in order to make the service convenient, the company should have cars within a five minute ride from the customer. In order to meet demand, it must be possible to provide the service even during peak hours – but this requires a lot of resources and is not optimal for meeting environmental goals. However, environmental protection is part of the company’s DNA.

“For example, if at one point 300 cars are needed for one line, so to speak, from the city to homes further away and the other way around, cars could be moved in advance to be ready near the city centre or in the residential area to be used when needed,” said Laansoo. “This is how we ensure sustainability and rapid growth for our company. We don’t have to be the world’s largest company with an environmentally friendly vehicle fleet, but we need to be an attractive option for customers and actually operate in environmentally sustainable ways,” he added.

Doesn’t all this sound too optimistic? “When this is your business, you have to be an optimist,” Laansoo replied. He added that if you want something to be done well, you must be stubbornly consistent and resilient in everything.

ELMO Rent was founded by the Estonian government in 2013. The company is part of three state programmes that have come and stayed to promote electric cars and car sharing. Enn Laansoo acquired ELMO Rent from the state in 2017 and acted as its director for the first three years.

Last year, he passed the torch to Julia Nekrasov, who has extensive experience in finance, and dedicated himself primarily to the new technology and preparing markets. Despite the coronavirus pandemic, the company’s growth has doubled.

What is it that keeps people from using electric cars? Laansoo says you might as well ask which came first, the chicken or the egg. He thinks the state did the right thing by investing in the charging infrastructure for electric cars. “But at the time, car manufacturers simply did not have enough electric cars. You could only buy the Nissan Leaf, Mitsubishi i-MiEV and Tesla from car dealerships. But now the charging infrastructure is coming up short in some places, which in turn hinders the purchase of new cars.”

The situation is beginning to change and car manufacturers are racing to offer people a more environmentally friendly option. ELMO Rent also sees this change in its own fleet: all dealerships now have something affordable to offer. “We have even had to label new electric cars, because the average person may no longer be able to tell them apart from petrol engine cars,” said Laansoo. Second, there are concerns that the use of an electric car is not yet convenient enough. “With an electric car, you still have to plan a bit in advance, because there are not as many charging stations as there are petrol stations and charging is not as fast as refuelling. As a result, the electric car has not yet reached the masses, although a lot of people applied for subsidies [from the Environmental Investment Centre] and many electric cars were ordered,” he added.

Over the past year, the company was able to grow, but not as fast as planned. “The goal was to reach a fleet of 120 cars.” ELMO Rent had an agreement to purchase more cars, but due to the coronavirus pandemic, factories were closed, the delivery times of the cars were delayed and finally the deadlines were completely out of the question. “It was relatively clear that we would not receive the cars by the peak season. We only reached 80 cars by the end of the year, and we still have a shortage.” Even so, the company managed to replace all of the old car fleet acquired from the state and according to Laansoo, this went faster than planned. “On the other hand, it showed that even during the coronavirus pandemic or difficult times, there is a demand for certain things.”

The company’s main goal last year was to further develop and promote the ELMO Rent vehicle sharing service and its technology. “New target groups came into the picture, the share of Russian-speaking residents and expats living in Estonia increased,” he said. Laansoo thinks that this shows that if people have a choice, they will choose the option that is better for the environment. “People are starting to like the idea of sharing or renting a car and the service is being used more and more,” says Laansoo.

The average user of ELMO Rent is a man aged 20–35. However, the proportion of women among the users has started to increase. “Our customers are mostly people who already own a car and understand that sharing a car is not taboo. Those are people who know that transportation costs take up a large portion of a person’s income and car sharing is ultimately the most cost-effective option.

Will remote-controlled cars hit the streets by the end of the year?

Jürgo Vahtra, head of the technical department of the Transport Administration, says that we can’t be sure if remote-controlled cars will be in traffic by the end of the year. “It is somewhat questionable, and depends on the technology,” he said.

Vahtra explained that from time to time, there can be gaps in the communications network and a real driver in the car might have to take control of the vehicle. These gaps can be caused by buildings that block the signal, and so data communication in some areas is slower. This means that in a remote-controlled car, there can be a delay in sending the video from the car to the remote controller, and the input from the controller to the car. “But if all areas of a district have been tested by the end of the year, it is very likely that we’ll see some remote-controlled cars there,” said Vahtra.

He says that the technology is evolving and it’s great to see someone try out things that appear fantastical at first. “Companies are doing a commendable job, it is costly for them. Challenging and interesting, but costly,” admitted Vahtra.